The women’s veteran community is one of power, encouragement and resilience. From the battlefield to back home, these women band together to continue their heroic legacy, together. Let these women tell you some  inspiring moments from their time in CAL’s Women’s Fitness Initiative.

Military Women by the numbers:

The United States ended the draft for military service in 1973, transitioning to the all-volunteer force that exists today.

At that time, the active component of the military, excluding the coast guard, comprised 1.9 million men and women, or about 1 percent of the population.

Now, there are about 1.3 million active-duty personnel, or less than one-half of 1 percent of the U.S. population.

Women veterans, who make up 10% of veterans and less than 2% of women, have traditionally been underrepresented in research.

Findings pertaining to women veterans and labor topics can be scarce and difficult to locate.

It has been five years since the ban on women in combat was lifted in 2015 and women began integrating previously closed combat arms billets in January 2016. 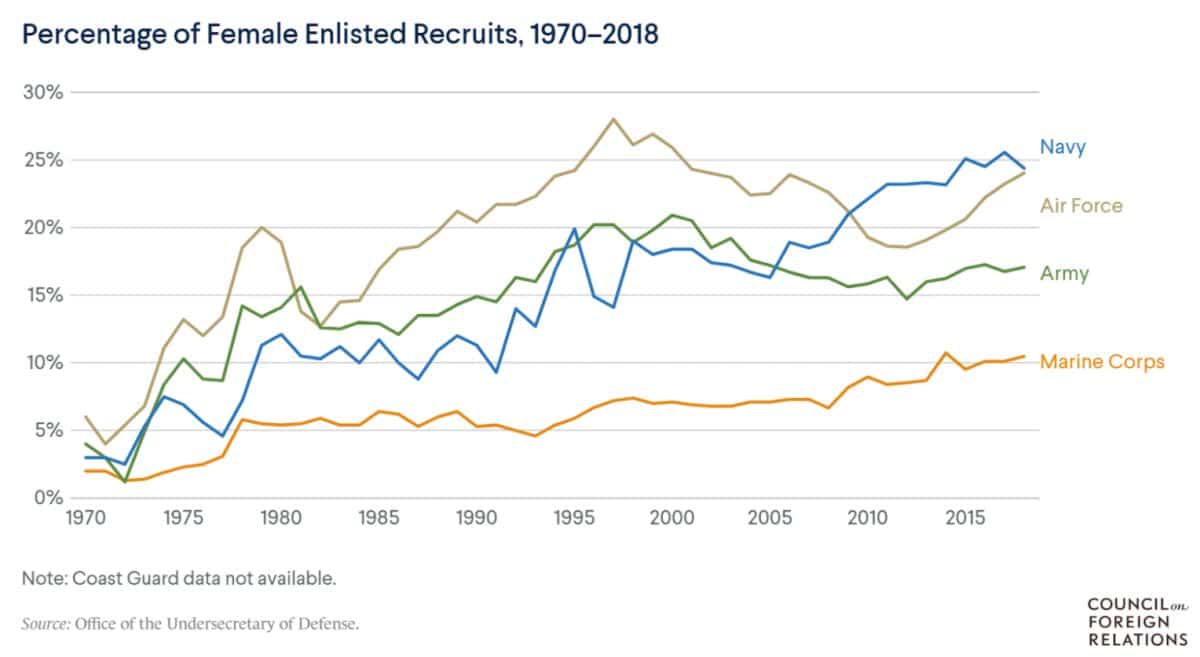 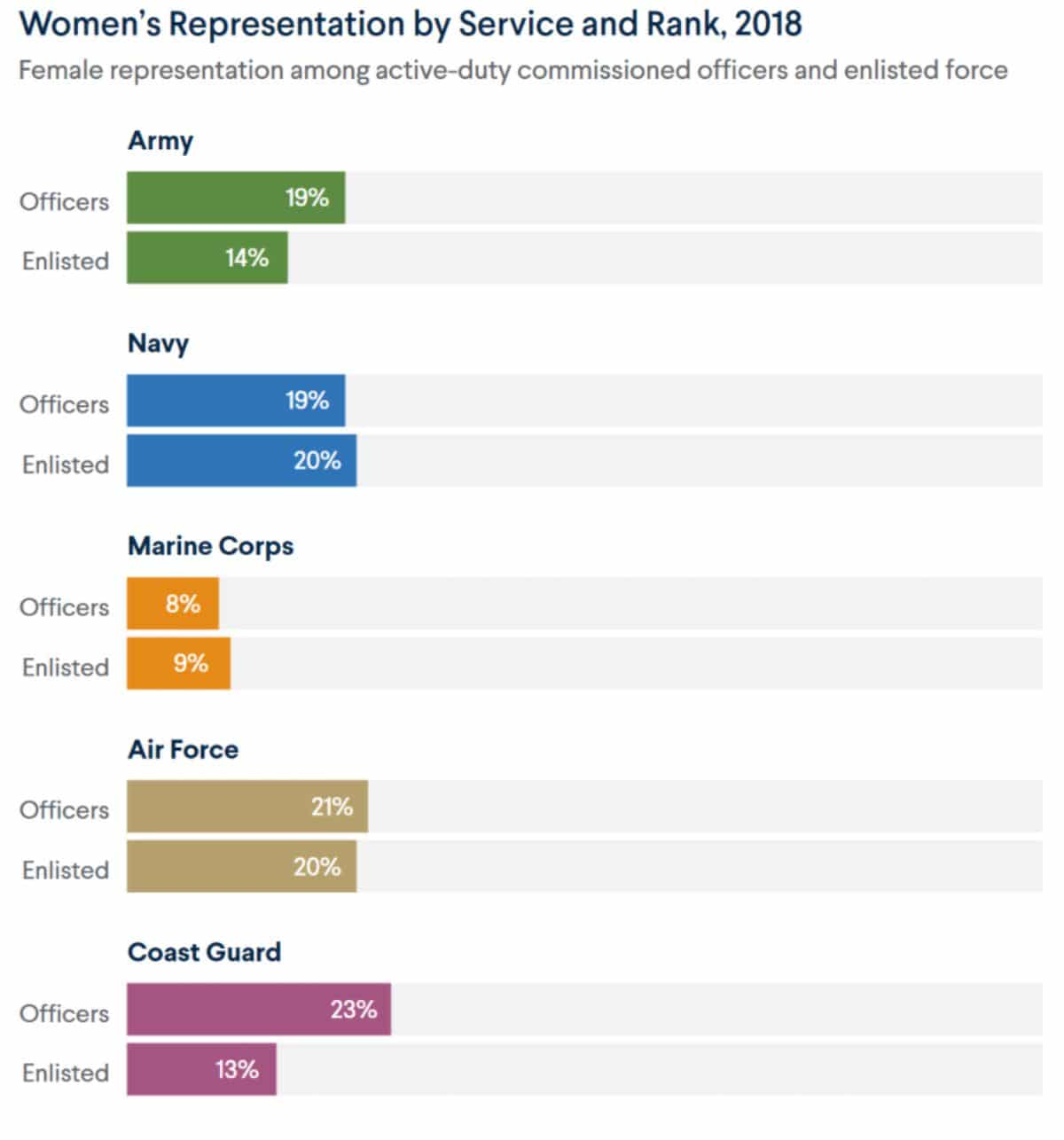 Recruitment  Concerns of young women considering military service differ from those of young men, and are well documented, yet the services have done little to directly influence or address these concerns, either through targeted recruitment outreach or structural policy change.

1) What was the most challenging part of being a woman in the military?
Being a woman in a position that historically always had been portrayed as a man is prideful. I along with so many other women were able to face the adversities and sign the dotted lines. Gaining respect within the ranks from men was another scenario.

2) As a woman in the military, what did you enjoy the most?
I enjoyed simply wearing the uniform and being able to call myself a Marine. I think it was more of a way I became proud of myself as I progressed into adulthood. The commodity was another. You knew your back was covered by another brother or sister.

3) What advice would you give to a young woman entering the military now?
To keep the pride and strength you have gained through your transition to a Marine and always keep it close in your back pocket for moments of weakness.

4) What lesson(s) did you learn that you now use in your everyday life?
Family is not only in your blood but in your new brothers and sisters.

5) How do you feel your continued call to service exists in your life now?
Never giving up on family while they are in their weakness. Pushing healing on myself and onto others through physical fitness.

Snapshot: My name is Melissa Leuck, and I enlisted in the WI Army National Guard at age 17 in March of 2003.  I deployed to Iraq in December of 2004 for 12 months as a 88M HET (Heavy Equipment Transporter) Driver. For 12 months I did convoys to every corner of Iraq, and I accumulated over 20,000 combat driving miles. While serving in Iraq, I suffered both mental and physical injuries.

1) What was the most challenging part of being a woman in the military?

The most challenging part of being a woman in the military for me came when I was on my Iraq deployment. I was a HET driver and we drove with TCNs (third county nationals.) While we were on the road we were responsible for the TCNS, their vehicle, and their load. A majority of the TCNs couldn’t wrap their heads around why a woman would be out on the road doing the job “that a man should be doing.” It was a constant battle to get them to respond to me as a woman without having to get my male driving partner to assist me.

2) As a woman in the military, what did you enjoy the most?

The thing I enjoyed most while in the military was the camaraderie with my fellow soldiers. You become such a tight knit group especially with people you go to war with. You can’t replicate that out in the world.

3) What advice would you give to a young woman entering the military now?

My advice would be to have a good support system in place and accept that support. I was so fortunate to have a strong support system with family and friends my entire time in the military. This helped give me strength when I was going through hard times. Even if I couldn’t open up to them about what was actually going on I always knew there were people out there who loved me and supported me.

4) What lesson(s) did you learn that you now use in your everyday life?

I learned resiliency, mental toughness, and how to endure while in the Army. When challenging times come up for me now in my life I am able to reflect back to my time in the Army and know that I will make it through the situation.

5) How do you feel your continued call to service exists in your life now?

I have found my call to continued service though the Catch A Lift Fund. I am blessed and honored to be able to serve my veteran brothers and sisters as the Head Coach and Women’s Fitness Initiative Lead at Catch A Lift. Cal has been such a big part of my recovery process because it has allowed me to continue to give back and serve.

Snapshot: Catch A Lift Fund member since 2016 who resides in Castle Creek, NY. Nicole served 12 years in the US Army with a deployment to Afghanistan as a Soldier, a team leader, .50 cal gunner, medic, someone trusted, respected, before being medically retired.

What was the most challenging part of being a woman in the military?

The most challenging part of being a woman in the military was finding my way to being seen as a fellow Soldier instead of just as a female. I was assigned to a QRF attachment as the only female serving with all males that I did not know and had never served with a female before. It’s also difficult for males to serve alongside a female and not follow the innate instinct to protect them. I needed to prove first that I could take care of myself and also that I was capable of looking out for them. I didn’t want them to be trying to protect me which I felt would detract from their protecting themselves and the others in our group.

As a woman in the military, what did you enjoy the most?

What I enjoyed the most wound up being right in line with what had initially been the most challenging part; being seen as a fellow Soldier. I formed very close bonds with the males who I served with. Even when we came back stateside, I was the only female in my platoon and we all became even closer than family. When males that you serve with call you brother, it is a bond that I can’t really explain. I’m still close with those same males as well as our First Sergeant and we get together a few times a year. These are friendships like no other.

What advice would you give to a young woman entering the military now?

Be who you are but at the same time, recognize the importance of the situation you are in. We are still the minority and that is perfectly ok. Do everything you are tasked with to the absolute best of your ability. Don’t push to be treated the same as the males then demand preferential treatment because you are a female. We are not the same, that is just reality. That said, we do deserve to be treated the same; with the same respect, the same fairness. That is something that has to be earned however, something a bit harder to earn in some situations as a female. Don’t expend energy being angry for any disparities, use that energy instead to be the best you can be. Work hard, have impeccable integrity, conduct yourself with discipline and respect those you are serving alongside as you want them to respect you. Be the type of Soldier you want to have in your squad.

What lesson(s) did you learn that you now use in your everyday life?

The same lessons that apply to serving in the military apply to civilian life. Treat others how you want to be treated. Don’t ask someone to do anything you wouldn’t be willing to do yourself. Don’t whine and complain but don’t throw your strength in anyone’s face wither. Be decent, gentle, but also be tough and don’t let anyone move your boundaries. Take care of others but don’t lose yourself. Be honest, be loyal and motivated. Be real, have integrity, don’t kiss anyone’s ass…earn their respect because of who you are, not a false version you create to impress someone.

How do you feel your continued call to service exists in your life now?

I have been incredibly fortunate to have served with many incredible people. I am just as fortunate to have met many incredible people since I got out. People who are selflessly helping veterans like myself have changed my life in ways I can never repay. I want to be able to offer as much as I can to others as well. So that they can have better experiences both as they transition out of the service and afterwards. Military bonds are difficult to find after service. When you find those people, those solid, good people who are there for you no matter what, you hold onto them, and you continue to be that person for others.

1) What was the most challenging part of being a woman in the military?

Being separated from my guy, my platoon, when we were pulled back into Kuwait. I, understandably, was placed in a tent with other females. I did not know the women, and I missed out on hanging out with my guys. Also, I had a more difficult time falling asleep without having my familiar and badass family watching my back.

2) As a woman in the military, what did you enjoy the most?

Proving myself, both mentally and physically, and finally being fully accepted into my platoon as a fully equal member. I liked providing myself because I am highly competitive. Also, having like 20+ big brothers looking out for me whenever I asked! That was really cool.

3) What advice would you give to a young woman entering the military now?

Don’t date the people in your own platoon. If something would happen to your platoon in combat, the remaining members of the platoon would feel uncomfortable with the possibility that you and your intimate partner will be too distracted on saving one another and putting your platoon second.

4) What lesson(s) did you learn that you now use in your everyday life?

5) How do you feel your continued call to service exists in your life now?

My husband and I recently helped our fellow Marine friend by living in our spare guest room while he was getting his life squared away. We also keep our fellow veterans, suffering from mental health issues, close to us. For example, I cooked an extra Thanksgiving dinner to cheer up a very depressed fellow veteran.